Bosnia & Herzegovina is more than just special. Its magical. Every trip to Europe should have this heart shaped country added to the list!

The war ended 20 years ago, and with the help of other nations, a lot of its landmarks have been restored and rebuilt. As well as its landmarks the country is full of mountains, lakes, rivers, and lots of vegetation.

Isn’t there a war going on there?

There are some people who think there is still war in the Balkans. The war ended in December 1995 with the signing of the Dayton Peace treaty. Though many older generations haven’t moved on from the scars of the war, most people now days mix with other cultures and religions and live day to day in harmony. The people of Bosnia & Herzegovina have left the war behind them, and are very welcoming to tourists.

Nothing EVER happened there.

The war in the early 90’s is what comes to mind when people think of Bosnia & Herzegovina. But did you know just a few years before the war broke out, Sarajevo hosted the 1984 winter Olympic Games? It was the first Winter Olympics held in a Communist state. Bosnia still plays host to fantastic winter activities, without the crowds!

In 2015, the Red Bull Cliff Diving Competition came to Mostar and will again in 2016. Also every year in July, an annual competition is help for the local men who jump daily of this bridge, a tradition going back to the Ottoman times. This began as far back as the 1500’s!

It’s capital city is nothing special

Often dubbed the Jerusalem of Europe, Sarajevo is full of diversity. There is nothing quite like a stroll through Baščaršija, the old town, hearing the ezan call of prayer then the church bells, the smell of strong coffee and fresh bread from the bakeries. Though it is the capital city, it will never leave you feeling cramped up even in peak season. 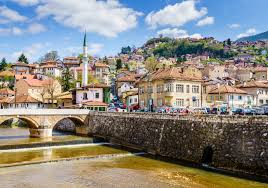 You might recall this bridge from history class. It is just at the corner of the buildings where Archduke Franz Ferdinand of Austria got assassinated by a young Bosnian Serbian, this set of a chain reaction resulting in the start of WW1.

The coffee is so bland..

Bosnian coffee is a part of the Bosnian and Herzegovinian identity. The locals love their coffee and love it strong. Served in traditional copper sets with square sugar cubes and a serving of Turkish delight! – Aside from the coffee itself, enjoy the atmosphere and friendly service often lost when travelling.

Also try have coffee with Baklava, its so good!

There’s also nothing good to eat

The sunsets are super boring…

A picture says a thousand words…

No, they really are!

Come on, how amazing is that!

With a mix of cultures and religions, and a mix of old and architecture, Sarajevo must be seen from above just to see how BIG it really is!

The streets are too crowded to get any good views.

Come at the right time (morning before 10am, evenings after 6pm) and you might only see locals opening or closing their shops, cleaning and getting ready for the day. 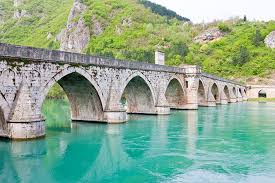 By noon the Old bridge in Mostar is packed, and very hard to walk across quickly much less get a good photo with no selfie sticks around you or a huge tour group in your way.

There is no natural beauty

Mountains, waterfalls, rocky cliffs, caves, lakes and rivers. This country is full of natural beauty!, the country plays host to activities such as rafting, trekking, hiking, mountain climbing, 4 wheelers, camping, the list goes on and on.

Mostar is so dull..

From cobbled stone streets and winding back streets, to the iconic Old Bridge where local men jump from into the icy cold Neretva river, visiting Mostar is like stepping into a fairytale. Though the war damaged the town, and the Old bridge was destroyed, it is now all restored and the tradition as old as the old bridge itself of locals jumping into the river still continues strong.

But there are no beaches

Actually there is one; Neum . It is situated  in Bosnia and Herzegovina’s only stretch of coastline, (22 kilometres long), and lies in between the two parts of Croatia. Its a perfect holiday place to enjoy the sun without massive crowds.

History in Bosnia & Herzegovina goes way back to historic times.  The earliest known inhabitants were the Illyrian tribes, but very little is known about them. In 168BC, it was ruled by the Romans, then the Slavs who came in the 6th and 7th century. The Slavs established and defined the culture and language. The Ottoman Empire took control of the country in the late 1400’s which again changed the county’s culture, traditions and religion. The Austrio-Hungarian empire ruled for a short time in the late 1800’s until it became a state of Yugoslavia, under communist rule of Josip Tito. However following his death in 1980, the government was weakened and left unable to cope with economic and political challenges; leading to the breakup of Yugoslavia. What followed was the  bloodiest war since World War II. Bosnia has constantly been an important region throughout history, and has been ruled by varying empires for its strategic position within Europe. 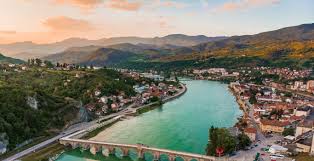 So as you can see these are some of the misconceptions and reasons why you should  visit Bosnia…..but they are all FALSE! It is 100% the opposite actually. So this summer, consider visiting this heart shaped country and see the beauty for your self. Enjoy the culture, learn the history and feel the generosity of the people, who despite having lost so much; give so much back.

All photos belong to me, so please do not use without permission. For more photos follow my instagram!

PLEASE NOTE: I only blogged about places i have been to. Yes there is more to B&H, up north but I cant account for places I haven’t seen. I just havent had the time to see everything. Also please note that some of these questions I have been asked before, some are for humor to inform others about this gorgeous country!